JAHSON ON THE RED CARPET AT THE KICKERS URBAN MUSIC AWARDS!

Last month I mentioned that Jahson and his manager Carol from Hummingbird Entertainments Ltd were attending the Kickers Urban Music Awards in London. Well what a star studded occasion it was! UB40, Gabrielle, Linford Christie, Hill St Soul, (who were also sat on our table!), Nate James, Kele Le Roc were among a few of the famous that were there on the night. Some were nominated for awards, and also gave fantastic performances on the night.

We were able to make a lot of contacts with people in the industry, one of whom was with the organisers of the event, Mr Jordan Kensington of Invincible Media Group. They are now acting as our PR Company and we are looking forward to a good working relationship with them, and to taking part in the many national and international opportunities that they have lined up over the coming year. Jahson will be on invincible radio on Wednesday 12th December at 3pm being interviewed, so check him out online at www.invincibleradio.com

This month Jahson was also spotted rocking with the crowds at Beverley Knight’s concert in Folkestone! What a performance! “I was totally bowled over by her, and thought she was fantastic and an inspiration” says Jahson, who knows, could he be supporting her on her next tour?? Watch this space! 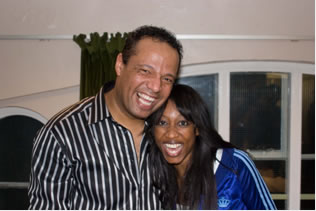 As we prepare for the festive season, Jahson wants to get you all in the party mood with another great VIP party night, taking place at Porters Bar on 26th December, from 9pm-5am! Jahson will be performing some of the tracks from his forthcoming album, and there will be some surprise guests in the house! The event is going to be filmed for a TV company, so don’t forget to look your best! There will also be some promotional giveaways on the night as well. Tickets are £12 in advance and £15 on the door, we have special booth tickets for £20 that seat 4-6 people and you get a bottle of free wine per booth. Check the gigs page for details.

If you want to be in with a chance to win two free booth tickets worth a total of £40 !!! for this spectacular party then all you have to do is answer this month’s question: Jahson was photographed with Nate James at the Urban Music Awards this year, for what did Nate James win an award for at the Kickers Urban Music awards this year?

Next year is going to be quite a busy year for us, and we really continue to value your support! We hope to see you all at the party on Boxing Night or at Jahson’s other performances, And why not buy someone you know the single for Christmas!

Anyway that’s all from me for now until 2008 all that remains to be said from Jahson, Carol and the Web team and all that worked with us throughout 2007 a big thank you to all of you and we wish you a happy Christmas and a truly prosperous 2008!

See you at the Party, if not see you on the other side !
One love xx

This entry was posted in Uncategorized. Bookmark the permalink.