New album out now. The Artistic Licence - The Heart of Jahson presented by Hurricane Music 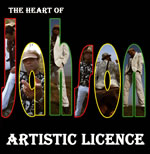 This debut album is sure to take the musical taste buds to both ends of the spectrum. From Jamaican Reggae performed at the UMA’s in Jamaica acting vice president performing alongside TLK Beanie Man to the beautiful lyrics enhancing yet again the touching music by Jose Padilla.

This album aptly named Artistic Licence is truly music that is needed to capture your emotions. With the new recording of that classic hit “Just When I Needed You Most” by Randy Van-Warmer taken truly to a different dimension. After performing with The Drifters featuring Johney moore, as a new young member in his twenties, for five years Jahson rapidly starting writing with Alan Glass acclaimed producer and song writer for “The Light House Family, Mis teeq, George Benson”

Unlike most other album’s, this will make everyone have a true favorite because if it’s Di-versity and the freedom to please all. There is no doubt music lovers! All over the world, tune into this new and up and coming now recording artist”Jahson” you are sure to be wowed! The Hurricane Label proudly presents Jahson! this is just the Beginning.

Visit the Music page to preview and buy the album now!!